He was in the fourth elementary class. He was a graceful Florentine lad of twelve, with black hair and a white face, the eldest son of an employee on the railway, who, having a large family and but small pay, lived in straitened circumstances. His father loved him and was tolerably kind and indulgent to him--indulgent in everything except in that which referred to school: on this point he required a great deal, and showed himself severe, because his son was obliged to attain such a rank as would enable him to soon obtain a place and help his family; and in order to accomplish anything quickly, it was necessary that he should work a great deal in a very short time. And although the lad studied, his father was always exhorting him to study more. 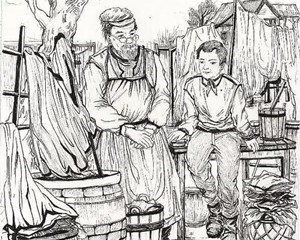 His father was advanced in years, and too much toil had aged him before his time. Nevertheless, in order to provide for the necessities of his family, in addition to the toil which his occupation imposed upon him, he obtained special work here and there as a copyist, and passed a good part of the night at his writing-table. Lately, he had undertaken, in behalf of a house which published journals and books in parts, to write upon the parcels the names and addresses of their subscribers, and he earned three lire for every five hundred of these paper wrappers, written in large and regular characters. But this work wearied him, and he often complained of it to his family at dinner.

"My eyes are giving out," he said; "this night work is killing me."

One day his son said to him, "Let me work instead of you, papa; you know that I can write like you, and fairly well." But the father answered:

"No, my son, you must study; your school is a much more important thing than my wrappers; I feel remorse at robbing you of a single hour; I thank you, but I will not have it; do not mention it to me again."